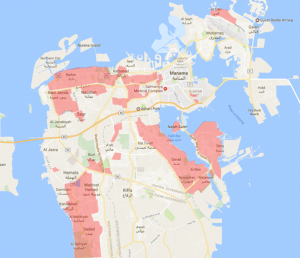 Map demonstrating red areas demarcated as “off-limit areas” in Bahrain. It is recommended to avoid transiting through these areas.

Situation Summary
Political:  On 5 March 2017, the upper house in Bahrain’s parliament approved a constitutional amendment which will enable authorities to run the country under a state of martial law without it being officially declared. If a civilian is charged in a case which involves the military or police forces, the case will be transferred to the military court. In addition to the amendments, parliament also filed a lawsuit which will dissolve the major opposition group Wa’ad, who is accused of supporting terrorism.  Wa’ad, also known as the National Democratic Action Society, has argued the move is another attempt by the government to suppress dissent and has threatened to argue against the lawsuit in court.  According to local media, the first hearing in court is expected on 20 March 2017.  Wa’ad is a secular political party that rejects violence but has been critical of the government’s crackdown on opposition groups since the Arab Uprising in 2011.

Intrinsic Comment
Wa’ad is not the first political party the government of Bahrain has banned. Al Wefaq, a predominantly Shia opposition party, was disbanded in July 2016 under accusations of fostering terrorism and spreading sectarianism. The spiritual leader of the party, Ayatollah Isa Qassim, was stripped of his citizenship. The political leader, Sheikh Ali Salman, received a prison sentence of nine years which has since been doubled. Although there had been some easing of restrictions, the constitutional amendment indicates a return in the government’s desire to crackdown on opposition groups or dissent.

Since the start of 2017, there has been an increase in sectarian tensions and civil unrest. The initial trigger in January 2017 was the execution of three Shia men accused of killing three police officers in March 2014. Bahrain rarely conducts executions and these were the first since the unrest in 2011. By the end of the month, an armed attack was conducted on Jau prison, south of the capital in Manama, which held a number of Shia prisoners convicted of anti-government protesting and terror-related activities. Ten prisoners managed to escape in the incident and one police officer was killed. On 26 February 2017, a bomb blast in Jau targeted a police bus, wounding four officers. Earlier in the month, two policemen were killed in separate targeted attacks, whilst three men were killed in an armed confrontation at sea as they attempted to flee to Iran.

Sectarian violence in Bahrain has also heightened regional tensions between Sunni and Shia. In early March 2017, Bahrain uncovered a militant group of 54 members, supported by the Iranian Revolutionary Guard who are believed to have provided training and weapons. Bahrain regularly accuses Iran of supporting attacks on security forces and inciting protests against the government.

Travel Advice: Political Risk – Moderate
Security threats posed towards business travellers to Bahrain are assessed as moderate overall; however, there are some significant concerns that travellers should remain aware of and monitor. In response to the widespread unrest, public rallies and gatherings have been outlawed throughout Bahrain. Regardless, garbage bins or rubber tyres are still burned in the middle of roads on occasion, such as Bahrain National Day on 16 December. Demonstrations also occur over important 2011 Uprising anniversary dates, such as 14 February as the date the protests first started or 16 March when the popular protest site, the Pearl Roundabout, was bulldozed by government forces. Incidents of unrest are predominantly reported in Shia neighbourhoods and occur most frequently around Friday prayers. Although 2016 has seen a decline in large protests, areas such as Sanabis, Hamad town, Saar, Budaiya and Sitra continue to see occasional smaller-scale demonstrations. Curfews are enforced at night in some off-limits areas. A curfew is also imposed on Bahrain’s waterways from 6pm to 4am.

Security forces maintain a heightened presence and state of alert. During periods of unrest, checkpoints on major roads may be increased. Security measures are also increased in hotels and shopping malls, particularly in the capital Manama. Security personnel may inspect handbags at mall entrances and on occasion inspect the underside of a vehicle prior to entering a secure car park.

Travellers to Bahrain are advised against travelling into off-limit areas, especially during periods of unrest. Off-limit areas are not clearly demarcated and taxi drivers may be prone to use them as potential short-cuts. A security driver is recommended as a minimum measure to mitigate the threat of accidently entering these areas. Travel to and from the airport to Manama does not require transiting any off-limit zones. Travellers to Bahrain should continue to monitor local events and maintain situational awareness. If a traveller encounters a protest, it is recommended they leave the area immediately.

Intrinsic remains available to provide journey management services for travellers to Bahrain. Meet and greet services, as well as pre-arranged transport will assist in mitigating the threat of encountering demonstrations or protest. Furthermore, regular check-ins with the travellers will serve as an added measure to ensure they are safe and secure, or assist in identifying their location in the event of an emergency.