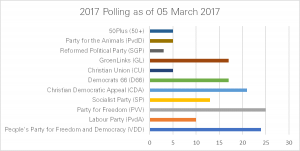 Situation Summary
Political: The Netherlands is scheduled to hold its general election on 15 March 2017. Recent trends within the Eurozone, and the most recent poll data, indicate that the far-right Peoples’ Freedom Party (PVV), headed by Geert Wilders, will win sufficient votes to become the largest or second largest party in parliament, with between 25-30% of the vote. As the Netherlands operates an electoral system of proportional representation, this cannot translate into an absolute majority in the parliament. A coalition will, therefore, almost certainly be the outcome of the election, although which parties will be involved remains unclear.

Wilders and other PVV representatives have made repeated public statements against ethnic minorities. Although a recent trial found Mr Wilders innocent of inciting hatred, a number of vigorous supporters for the PVV are suspected of harbouring racist, extremist, and violent views towards immigrants, particularly those of Moroccan, North African, or Middle Eastern appearance.

Intrinsic Comment
The increase in right-wing populism and anti-EU sentiment across Europe has been matched by an increase in rhetorical aggression in Dutch political society. However, public statements made by leaders of all other major parties suggest that the PPV will fail to find coalition partners for government, likely resulting in a government which excludes the largest single party in Parliament. In itself, this would not be unusual for a Dutch government.

If the PVV is the largest party yet excluded from government, protest and unrest amongst the supports of Mr Wilders and the PVV is likely in the aftermath of the elections and the coalition negotiations. Members and officials of the PVV have previously used racially divisive rhetoric. There is a chance that a strong electoral result for the party will motivate and embolden violent, right-wing groups and lead to an upswing in racist attacks. Such a pattern was noted in the aftermath of the referendum on the UK’s membership of the EU, where the UK Home Office reported that hate crimes rose by 41 per cent.

The PVV’s recent ascendancy is not purely the result of increasingly pervasive right-wing attitudes. Whilst the PVV is polling at around 5% higher than previously, its relative strength is also due to the former largest two parties loosing approximately 15% each. Polls suggest that these votes have been redistributed relatively evenly across the full range of smaller parties, spanning the whole political spectrum. As such, despite an increasingly fragmented political scene, the Netherlands broadly retains a culture of significant political and social liberalism and openness. Counter-protests can be expected against any PPV rally prior to the election. Similarly, it is likely that counter-protests will greet any PPV rallies in the aftermath of the election.

Protests in Netherlands generally require official pre-approval. In light of this, Dutch police tend to respond to protests rapidly, enforcing the terms of the protests, and targeting potential troublemakers before any noteworthy violence occurs. In November 2016, 166 people were arrested at an anti-fascist protest for failing to adhere to the full requirements of the authorities. Police had demanded that protesters leave their faces uncovered.

Travel Advice
Travellers are advised to avoid any protests, political rallies, or large public gatherings either before or in the immediate aftermath of the election on 15 March 2017. As previously noted, protests in the Netherlands are generally peaceful; however, they retain the ability to turn violent with little warning. Dutch police may prevent potentially violent situations from escalating through large-scale arrests.

Intrinsic would not advise clients that enhanced security provisions are required when visiting Netherlands. Travellers are advised to maintain the same level of situational awareness as they would in any western urban centre at all times, and undertake sensible security provisions while travelling in the country.