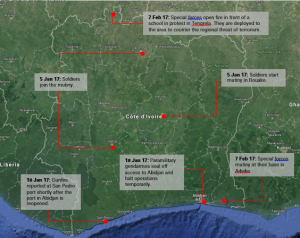 Situation Summary
Political: The Ivory Coast has been applauded for their economic recovery since the end of the civil war in 2011. However, reports in January of soldiers mutinying in their barracks in Bouake, has brought the underlying threats to the Ivory Coast’s recovery to the forefront once again. The location for the start of the mutinies is important and perhaps symbolic. Bouake is the second largest city in the Ivory Coast and was once controlled by the rebels in the civil war. The trigger for the mutiny was the government’s failure to pay bonuses to the soldiers, a long-standing promise in the peace deal. As military unrest spread to other urban centers of  Daloa and Korhogo, the government capitulated to the soldiers demands and agreed to pay the bonuses. This was not an isolated incident however, and on 08 February 2017, special forces would also mutiny in the army barracks town of Adiake. In contrast to the governments conciliations the previous month, their response to the special forces, who are responsible for the presidents security, was much harsher.

The initial agreement to pay over 8000 soldiers their promised bonus, has inspired more soldiers to follow a similar action.   Current estimates have the Ivory Coast’s security forces at 23000 strong. Despite a large military planning budget approved in 2016, set to modernize and update the military, there is not enough room in the budget to approve bonuses for all the soldiers. President Ouattara has been forced to reorganize some high ranking members in the military as a result, some of whom were rebel leaders during the civil war. However, the unrest has already begun and has begun to affect the public sectors.  On 18 January 2017, paramilitary gendarmes sealed off access to Abidjan’s main port. Soldiers positioned themselves at entrances to the port and shut down operations temporarily. As Ivory Coast is one the world’s leading producers of cocoa, the disruption at the port warehouses led to an increase in cocoa futures in London in response to unrest concerns.
Intrinsic Comment
President Ouattara’s focus on economic development has led to some stability in the Ivory Coast since 2011. However, rapid economic growth has not removed the underlying tensions which instigated the decade long civil war. President Outtara’s thought was by improving prosperity for all, it would lead to healing the wounds of war for good. Six years later and peace agreements made prior to the end of the conflict have not been fully implemented. Critics of Ouattara have commented that failure to reform the military years ago has left rebel remnants deeply entrenched in military structures. Their loyalty is not directly to the state, instead the state is indebted to them. The president’s quickness to make an agreement with the military’s demands has the potential to divide the country rather than restore peace. As more pay-off agreements are made to those who have the ability to assert power, the less the economic success of country is seen to flow down to the have-nots.

The military’s mutiny has also ignited the public sector to protest. Approximately 200,000 civil servants conducted a strike regarding overdue salary payments in January. Police were forced to fire tear gas at demonstrating students in Abidjan on17 January 2017. Teachers had refused to work since New Years, demanding an increase in salary. According to reports, students were forced from schools to protest in support of their teachers.

Since January, the government has been required to address growing unrest from farmers in the cocoa industry. Due to low prices of the cocoa bean, local exporters have had to default on their deals with farmers, creating warehouse backlogs of the product. In order to address the concerns of the local farmers the government has been required to intervene, and although there has been some alleviations and assurances by the government, cocoa farmers remain concerned. As the price of cocoa is unlikely to increase in the near future, this issue will may continue to fuel civil unrest in the Ivory Coast.

Security Advice
Travelers to the Ivory Coast, or Cote d’Ivoire, as it is also known, should be aware of the ongoing unrest in country. President Ouattara’s government has made some agreements with the mutinying forces, restoring temporary stability to the country. However, these bonus payments are yet to have been paid to the military and there is a likelihood that unrest amongst soldiers may continue in the short term. These protests have inspired other forces to do the same, and has also encouraged unrest in the public sector.

Due to the fragile nature of the state, Intrinsic recommends extensive journey management planning with a security driver and vehicle as a minimum recommendation, along with travel tracking technology and 24hr response services. The use of armed close protection services should strongly be considered at this time. Caution is advised if travel to locations near army barracks or police stations is required. Incidents of unrest are characterized by soldiers firing in the air indiscriminately, which has the potential to lead to collateral damage. Events will continue to be monitored in Ivory Coast for any developments which may lead to increased instability. For all essential travel to the Ivory Coast, Intrinsic is able to provide the full range of journey management services.