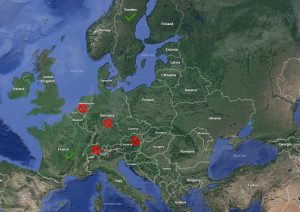 Situation Summary
Political: On 11 March 2017, the Dutch government barred the Turkish Foreign Minister from flying to Rotterdam to attend a rally, with the aim of raising support for the upcoming referendum in Turkey on 16 April 2017. A Yes result on the referendum will expand current President Reccep Tayyip Erdogan’s presidential powers.  Later in the day, Turkish Family Minister Fatma Betul Sayan Kaya was escorted across the border into Germany after she was prevented from entering the Turkish Consulate in Rotterdam with the same campaigning purpose. Dutch authorities were concerned over the potential unrest Turkish campaigning activities may cause a few days prior to the Dutch general election. The Dutch elections have seen an increase in nationalist sentiments and a growth in support for the rightwing Party for Freedom (PVV). President Erdogan responded with strong rhetoric, referring to some members of the Dutch government as ‘Nazi remnants’ and ‘fascists,’ heightening diplomatic tensions between the NATO allies.  Turkey has threatened further harsh actions against the Dutch government. The Dutch Embassy in Ankara and Consulate in Istanbul have increased security measures as demonstrators against the Dutch government have gathered outside. Turkish protesters gathered outside the Consulate in Rotterdam on the evening of 11 March 2017, wishing to see the Family Minister. Police were forced to use water cannons and police dogs to disperse the crowds who threw bottles and stones.
Intrinsic Comment
There are a large number of Turkish citizens residing in Europe, particularly Germany and the Netherlands, who are eligible to vote in the upcoming referendum. Some reports have estimated the number of those who are eligible to vote are equivalent to Turkey’s fourth largest electoral district. Around 1.4 million out of 3 million Turkish citizens living in Germany will be eligible to vote. Turkish ministers are therefore eager to campaign and gain the support of these voters. A positive result in the referendum will shift Turkey from being a parliamentary republic into a presidential one. Critics have argued President Erdogan will exploit this opportunity to increase the government’s current authoritarianism. Erdogan, on the other hand, has cited the domestic threats of Kurdish and Islamist militants, in addition to the July coup, to justify the need for a more stream-lined decision-making process. Adoption of the referendum will enable the Turkish President to appoint ministers, prepare the budget and enact certain laws. In Turkey, current polls suggest the country is mostly divided on the referendum. It is estimated the Yes and No vote are split evenly at 40% with 20% remaining undecided.

The Netherlands were not alone in barring Turkish political campaigning in their territories. Germany, Austria and Switzerland followed similar action for the same reasons. In contrast, France and Sweden chose to allow the rallies to go ahead as the unrest threat was assessed as lower. It is important to note however, Germany and the Netherlands have the majority of Turkish residents. Russia, in addition to Egypt, Iraq, Mauritania and Tunisia all condemned the actions taken by the Dutch over the weekend. An announcement by the EU Foreign Policy Chief, Federica Mogherini, stated “decisions with regard to the holding of meetings and rallies in Member States are a matter for the Member State concerned.”

Turkish foreign minister, Mevlut Cavusoglu, had been barred the previous week from a rally due to be held in Hamburg, Germany. Instead he was able to speak from the Turkish Consulate. After he was refused entry by the Dutch, he threatened economic and political sanctions against the country. This may seem unlikely however as the Netherlands are a key source of foreign direct investment in Turkey, supplying 14% of the cumulative total the country receives. On 13 March 2017, the Dutch government released a travel warning for its citizens who may have plans to travel to Turkey. Specific advice was to stay alert if in Turkey and avoid gatherings or crowded places.

Travel Advice
Travellers are advised to avoid any protests, political rallies, or large public gatherings in the Netherlands either before or in the immediate aftermath of the election on 15 March 2017. Protests in the Netherlands are generally peaceful; however, they retain the ability to turn violent with little warning. Dutch police may prevent potentially violent situations from escalating through large-scale arrests. Solace Global would not advise clients that enhanced security provisions are required when visiting Netherlands. Travellers are advised to maintain the same level of situational awareness as they would in any western urban centre at all times, and undertake sensible security provisions while travelling in the country and monitor Solace Secure for intelligence updates.

Travellers to Turkey should maintain a low profile. As always, large crowds and demonstrations should be avoided in case they turn violent or are targeted by extremist groups due to the high threat of terrorism. Protests and rallies are frequent occurrences in Istanbul, particularly in Taksim Square. The referendum on President Erdogan’s presidential powers is due to be held on 16 April 2017. There is potential for rallies and counter-rallies to be held in the larger cities as at present, voters remain largely divided. Police are known to adopt the use of force in order to disperse crowds, such as the use of tear gas and rubber bullets. In the event of a spontaneous protest, travellers are advised to leave the area as soon as possible.

Intrinsic remains available to provide journey management services for travellers to Turkey. Meet and greet services, as well as pre-arranged transport will assist in mitigating the threat of encountering demonstrations or protests. Furthermore, regular check-ins with the travellers will serve as an added measure to ensure they are safe and secure, or assist in identifying their location in the event of an emergency.