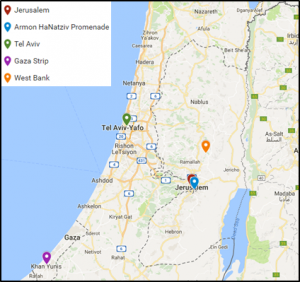 Situation Summary:
Terrorism: A Palestinian man was shot dead after deliberately ploughing a truck into a group of soldiers gathered at Armon Hanatziv Promenade in Israeli-occupied East Jerusalem. Four soldiers were killed, three of them cadets, 15 were wounded with three described as being in a serious condition. The attacker, Fadi Qunbar, resided in Israeli-occupied East Jerusalem and previously spent time in an Israeli jail. Nearby soldiers killed him as he attempted to reverse over those he had already hit. In response to the attack, local security forces have arrested nine people, including five members of the attacker’s family. More arrests and raids are expected in the coming days and weeks. Police have also sealed off Qunbar’s predominantly Arab neighbourhood in East Jerusalem, as they investigate the attack. Israeli Prime Minister Benjamin Netanyahu has suggested that there is a possible connection between this attack and Islamic State-inspired attacks in Paris and Berlin.

Intrinsic Comment:
At present, the link between the attacker and Islamic State seems a difficult connection to make, given that an Israeli security official previously stated that there were not any active Islamic State cells in Israel. Hamas, designated a terror group by several governments, academics, and international

organisations, have praised the attacker for targeting the Israeli soldiers. Hamas is not linked to the Islamic State, and is the governing authority in Gaza. Nevertheless, the group maintains a well-established Islamic militant tradition, and is frequently responsible for attacks on Israel. Hamas’s support for this terrorist act is likely symbolic, rather than indicative of any responsibility. It is unclear what inspired Qunbar to carry out this attack or if he had any specific links to any international terror groups.

This attack has broken up a period of almost unrivalled tranquility in the Israeli-Palestinian relationship. While there have been some small level clashes between Palestinians and Israeli troops, there had been an extended period without large, deadly attacks. Despite the relative peace, recent months has shown an increase in tensions in the region. An Israeli military court recently convicted a soldier of manslaughter for the fatal shooting of a wounded Palestinian knife attack suspect. This move was unprecedented and there have been a series of calls for the soldier to be pardoned.

The UN Security Council Resolution 2334, adopted on 25 December 2016, criticised Israel’s flagrant violation of international law in its settlement building in Palestinian territories, including East Jerusalem. The resolution was passed with 14 votes for, with one abstention – Israel’s traditional protector, the USA. US Secretary of State John Kerry recently lambasted the reactionary tendencies of the current Israeli government, fearing the further entrenchment of these positions. Settlement building has grown recently, with Prime Minister Netanyahu planning further building. In response, Israel announced it would halt US$6 million of the funding it sends to the UN with Netanyahu angrily hitting out at countries which voted for the resolution and the United States. The incoming Trump administration have pledged increased support to the Israeli state and have event proposed moving the US Embassy to Jerusalem, a move that will undoubtedly heighten tensions with the Palestinian community.

The Palestinian Authority (PA) has been blamed for many terror attacks, particularly due to concept of “popular resistance”. This concept was designed to instigate a wave of non-violent, peaceful protest by Palestinians. Instead, Israeli commentators suggest that it instigates individual, small scale terrorism. Such terrorism usually involves a lone attacker, normally armed with rudimentary weapons, such as knives (or in this case a vehicle), targeting Israeli military personnel. This has been seen since 2015, when the use of such terror tactics increased. This most recent truck attack is similar to other individual attacks, although the death count is far higher. Lone attacks are far more prevalent in the West Bank and Jerusalem than in Gaza.

This attack will undoubtedly give Prime Minister Netanyahu and his government the rationale to crack down further on Palestine and Palestinian rights. In the coming weeks and months, security raids and restrictions for the Palestinian people should be expected. It is also likely that Israeli settlement building will be accelerated. Both of these moves increase the likelihood of Palestinian violence against Israeli security forces and the general population. Violence should be expected in and around the Israeli-West Bank and Israeli-Gaza borders, and random terror attacks in Jerusalem and major Israeli cities may also increase.

How the Israeli-Palestinian conflict and relationship develops in the medium- to long-term will be greatly affected not only by the Israeli response to this attack, but also by the Trump administration. President Obama’s attitude to the Middle East Peace Process was consistent if not effective. Donald Trump’s premiership will offer serious change, mostly because it is unclear what Trump plans to do. The President-elect has hinted at a greater support for Israeli interests but what exactly this means in practice, is unclear. The Israel-Palestine relationship stands to spiral into violence unless an unlikely agreement is reached.