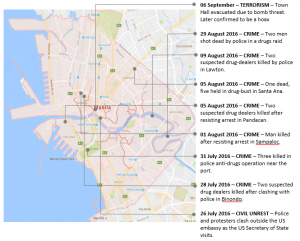 Since assuming the Filipino presidency on 30 June 2016, Rodrigo Duterte has begun to challenge conventional norms. He received a huge mandate to make the changes he promised during his election campaign; an election he won by over six million votes. Duterte is not politically-correct and has gone against diplomatic ideals when dealing with other countries, including insulting the US envoy to Manila with a homophobic slur.

His greatest impact has come in the realm of law and order, especially in relation to drugs. Duterte was known to have supported extra-judicial death squads while he was mayor of Davao on Mindanao Island. He has taken this tactic and applied it to the country as a whole, giving police extra powers and orders to shoot-to-kill drug suspects. Since taking office there has been a marked increase in the killings of suspected drug criminals. A ‘kill list’ is regularly updated and published by Filipino media outlets; the list currently contains 564 entries of those killed since 30 June 2016. Government armed security personnel, from both the police and armed forces, have clashed with rebels and the private security of a number of political figures across the country. 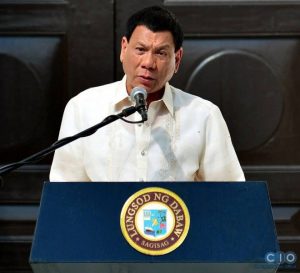 Diplomatically, Duterte has made some overtures towards Beijing as the two countries seek to come to some form of agreement over the long-term future of the islands in the South China Sea. He has also issued a unilateral ceasefire with the armed communist rebels, the New People’s Army, and has laid the groundwork for future peace discussions. The conflict between the communists and Manila has left around 30,000 people dead since 1960.

Duterte has also escalated the conflict with Islamic militants in the south, notably Abu Sayyaf, who continue to target shipping routes in the area and small-scale terror attacks.

A bomb attack was recently carried out on 02 September 2016, on a market in southern Davao City, killing more than a dozen people. The country has since officially been declared in a ‘state of emergency’ due to an increase of violence and lawlessness on the southern island.

It is very possible for non-criminals to become wrongfully accused by the authorities but accusations generally remain limited to Filipinos (and a few Chinese). Kidnappings and terror attacks are on the rise, as seen with the recent bombing in the southern area of Mindanao (September 2016). Based on this, the Foreign Commonwealth Office (FCO) advise against all travel to the Mindanao area due to the current threats of bomb attacks & kidnappings and clashes between the military and insurgent groups.

Due to the current state of emergency, expect heightened security at transport hubs such as airports, and always comply with authorities at these checkpoints. Allow extra time for these precautions.

Between June and December, the Philippines is particularly susceptible to typhoons, which can cause flooding and landslides. Travelers are advised to follow the direction of the local authorities. Street crime is quite common across the country, partly explained by the prevalence of poverty. Travelers should be particularly aware of their belongings in busy areas, including transport hubs.