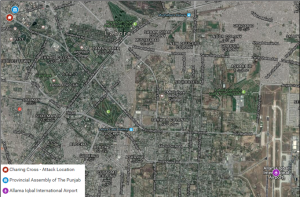 Situation Summary
Terrorism: At least 16 people have been killed and around 60 others injured after a powerful bomb blast outside the Punjab Assembly in Lahore. Specifically, the attack occurred at Charing Cross on Mall Road, an incredibly busy road and intersection in Lahore. A Pakistani Taliban-linked terror group, Jamaat-ur-Ahrar, has already claimed responsibility for the attack. Initial reports suggest that a bomb exploded when a suicide motorcyclist crashed into a police vehicle at a protest over new drug laws. Other reports suggest that timing of the attack was due to coincide with the media going live to cover the protest. Around 400 pharmacists were participating in the protest.  Among those killed are protestors, security forces policing the march, and the media covering it. Police have so far arrested one individual for involvement in the attack.
Intrinsic Comment
Jamaat-ur-Ahrar a Sunni fundamentalist terror group with close ties to the Pakistani Taliban. They have been active across Pakistan. Both Jamaat-ur-Ahrar and the Pakistani Taliban are fighting to topple the Islamabad government and install a strict interpretation of Islamic law

This is the largest terror attack in Lahore since 2016, when 75 people were killed. Jamaat-ur-Ahrar also claimed responsibility for that attack on Christians celebrating Easter in Gulshan-e-Iqbal Park. In the aftermath of this attack, more than 200 people were arrested in South Punjab. It is possible that the police response to this attack will be similar.

Security forces fear further attacks. Other cities, including Islamabad, have been put on red alert in case there are further coordinated attacks. Indeed, an explosion has also been reported in Quetta, though it is unclear if these two events are related. Jamaat-ur-Ahrar have, however, previously conducted attacks in Quetta. This includes an attack at a hospital which killed 74 people.

Lahore has been considered a relative safe city, safe from much of the terrorism and internal strife which has beset, and continues to beset, many areas of Pakistan, including the Federally Administered Tribal Areas. This most recent attack on Lahore demonstrates the very real threat of terrorism in Pakistan. Furthermore, the attack shows that the Taliban, and its affiliates, have the means and willingness to attack even those areas considered to be relatively safe in the country.

This attack also demonstrates the importance of avoiding high-profile events such as protests. This attack demonstrates a militant desire to attack large gatherings in order to create the largest publicity possible for their cause. This is a common tactic for terrorists across the world.

For travel to Lahore and certain other locations in Pakistan, Intrinsic would recommend that travellers employ a security-trained driver, extensive journey management planning, and travel-tracking technology, to help mitigate against the risk of violent crime, terrorism, and civil unrest. In the short-term, we would also advise travellers to employ an executive protection agent. To be armed, this agent is required to be a local national. For other areas of the country, we may advise a greater physical security presence, depending on the area of travel.